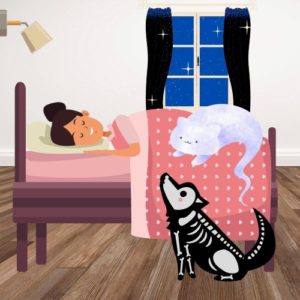 “My uncle bought a very old farm in Connecticut countryside (where my family is from on my mom’s side). It was built in like 1771 or 1772 and I think it was a tavern at some point before or during the war. There’s reportedly a civil war soldier that has been seen on the stairs.

“As a teenager, he left me alone in the house one night — only one neighbor in a mile in either direction I think,, and I thought I was going to just freak. Every single creak of the house….I was a nervous wreck.

“In the same house, I also encountered a ghost cat one night laying in bed — it literally crawled on me while I laying awake chatting with my Aunt Sue. I asked my aunt, ‘There’s something on me, it’s crawling, I can feel it but i can’t see it!’ She said it was a cat that had died that liked to come back and crawl into bed with people. Eeek!

“They also had a small white dog ‘April’ (little poodle) that ‘came back’ and was seen by the family in the kitchen one day. My uncle died and left the house to his granddaughter who lives there now. She says she hears and feels things but hasn’t seen anything yet. ”

It’s nice to be reminded that some hauntings are friendly ones!