Is it a Cemetery or a Graveyard? 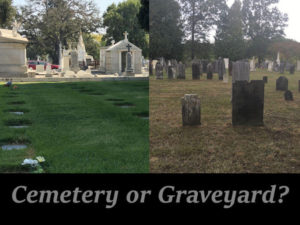 Search for “graveyard” in a dictionary and the definition will likely be a single word – “cemetery.” When used in everyday conversation, the two words are commonly interchanged without a thought, but these two eternal resting places have their differences.

The first known use of the word cemetery predates graveyard by three centuries. It stems from a melting pot of languages, according to merriam-webster.com, and roughly translate to “sleeping chamber” or “burial place.” Graveyard, on the other hand, appears to have evolved from the much older terms “grave” and “churchyard.” Churchyards, or land belonging to a church and usually adjacent to it, were regularly used for burial grounds although it was not their exclusive purpose. Designated areas within a churchyard that were reserved for burials came to be known as graveyards.

There is a long and complex history of Western burial practices, but suffice it to say that religious organization (i.e. the Church) usually dictated the terms. This means graveyards were often exclusive final resting places for members of a shared religion, and more often than not, of a specific local parish community. While graveyards used to dominate the scene for burials in the Western world, they’re extremely uncommon in modern use. Why is that?

END_OF_DOCUMENT_TOKEN_TO_BE_REPLACED

How can you learn the history of your haunted property?

How can you find out who lived – or died – on the property before you owned it or lived in it? It helps to know a friendly real estate agent or title company employee if you want to get the distant past history of your haunted land.

A title company can run a title search and get what is called the “chain of title” for you.  That will tell you much more than a property profile or the county records, which often go back only about 10 years. A chain of title can go way, way back – as far as Mexican or Spanish land grants in our area.

Sometimes the chain of title will also include death certificates, so you’ll know if anyone died on the land or in the house.  But don’t expect this to be absolutely perfect – no guarantees here!

The title records won’t include everyone who lived at the property address, only those who were on title, so at best it can give you a particular window. But with the owners’ names you may be able to expand your research and learn more about what took place there in days gone by.  Google and other search engines can be a huge help, but so can archives from the paper (San Jose Mercury News and others). Don’t forget to just ask the neighbors – you’d be surprises at how much they might know!